On friday we took Indy in for her 12 month checkup. She is and always has been an exceptionally healthy baby; she's chubby and happy, she's never had a drop of formula, and I'm picky about what solid foods I allow her to eat. I double-check her car seat, place electrical outlet covers (which she diligently removes) and brush her teeth. These things are in my control. So when they did a blood panel that showed she was slightly anemic, I was a little jarred, especially after an entire year of passing every test with flying colours. Our pediatrician wrote a prescription for liquid iron supplements, but after some research on some unpleasant side effects of using iron supplements, we decided to try to correct her anemia naturally through dietary changes first. We researched iron rich foods, picked up spinach, chicken livers, blackstrap molasses and some citrus (vitamin C helps absorption), and thus began the journey of finding ways to creatively incorporate more iron into her diet. It still weighed on me, the burden of "are we doing the right thing? should we just get the iron drops? is she getting enough iron? and will this even work?" But my mind settled down a little, and really, the whole thing was still in my control; I can watch what she eats, offer iron-rich foods, and her iron levels will likely rise. But today I had a voicemail from the doctor's office saying that they had some test results back from her bloodwork. They never call to tell you everything is just fine. I talked to the nurse quickly, long enough for her to blurt out that there was "a bunch of things we needed to go over" and that "she has elevated lead levels," and then was put on hold for a while. She even told me I needed to get a paper and pen. I'm going to need to write things down? What the heck are we even talking about here? Finally, she returned and told me that her levels were at a 10. Ideally it would be a zero, since lead is essentially a poison, but the preference is that it at least be below a 3. Numbers of 10 or higher are when the CDC recommends "public health actions be initiated" (although the new recommendations just this year are that the number be dropped to 5).  She asked me a huge string of questions and we made a follow up appointment for more bloodwork. At one point she even said "we had a boy who swallowed a lead fishing sinker and his lead levels were even higher than her's, if you can believe it." Ummm, lady. . . was that an attempt to make me feel. . . better?

I knew before Indy was born that there was lead in our home. We live in an old building, we have lead paint (when I was pregnant with Indy I had a brief lead paint panic period, and bought a bunch of lead tests which confirmed my suspicions), and possibly lead in the pipes. (I have always had a bit of a phobia related to lead paint. It's a poison. . . that is in our homes. . . where we are supposed to feel the safest in all the world, and all you can do is either cover it up and hope it stays contained or have it removed at great expense and possibly even danger.) Either way, I figured she would be fine, since the paint was all pretty well painted over, and we don't let her gnaw on door-frames or anything. We thought we were being careful and it just hasn't been enough. The information has just been sitting in my stomach like a brick. At one point I just hugged her and cried. For the first time in her life I feel unable to completely protect her. We can't be completely sure where she is being exposed and so it just feels like this invisible poison is lurking around in our own home. We can try to take measures to lessen exposure, but the lead is still there. I have a slightly obsessive personality which most definitely gets activated by things like this, so obviously I can't think of anything else (nor google anything else. Google can be a mother's worse nightmare in situations like this, haha). I know she will be fine and everything will work out, but right now it's still so scary, and I would like to ask for any prayers, information and advice anyone can offer. Thank you. 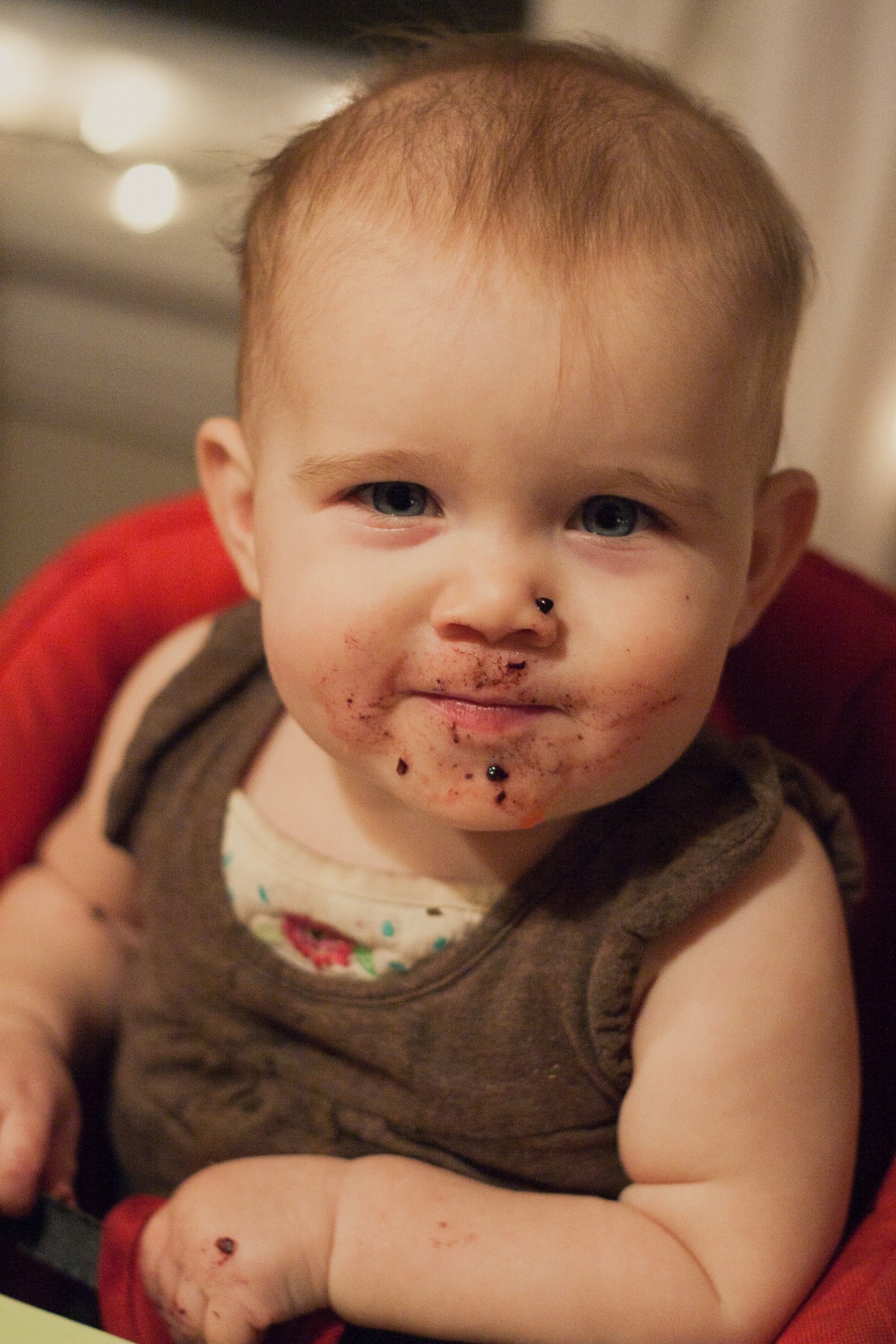 We're doing pretty great over here. I sometimes stress over trying to make her eat solids (I think I feel the pressure of a society which is heavy-handed on the solids, and tends towards early weaning at around a year), but we're at about 75% breastmilk, 25% solid food, which is actually right on track.

New "likes" for this month include:

We also recently gave her untensils, since she's been eyeing ours and I've noticed her playing with spoons by dipping them in bowls and bringing them to her mouth. She actually really surprised me with her dexterity with spoons and forks! And it seems to be encouraging her to eat more, because she enjoys the process. 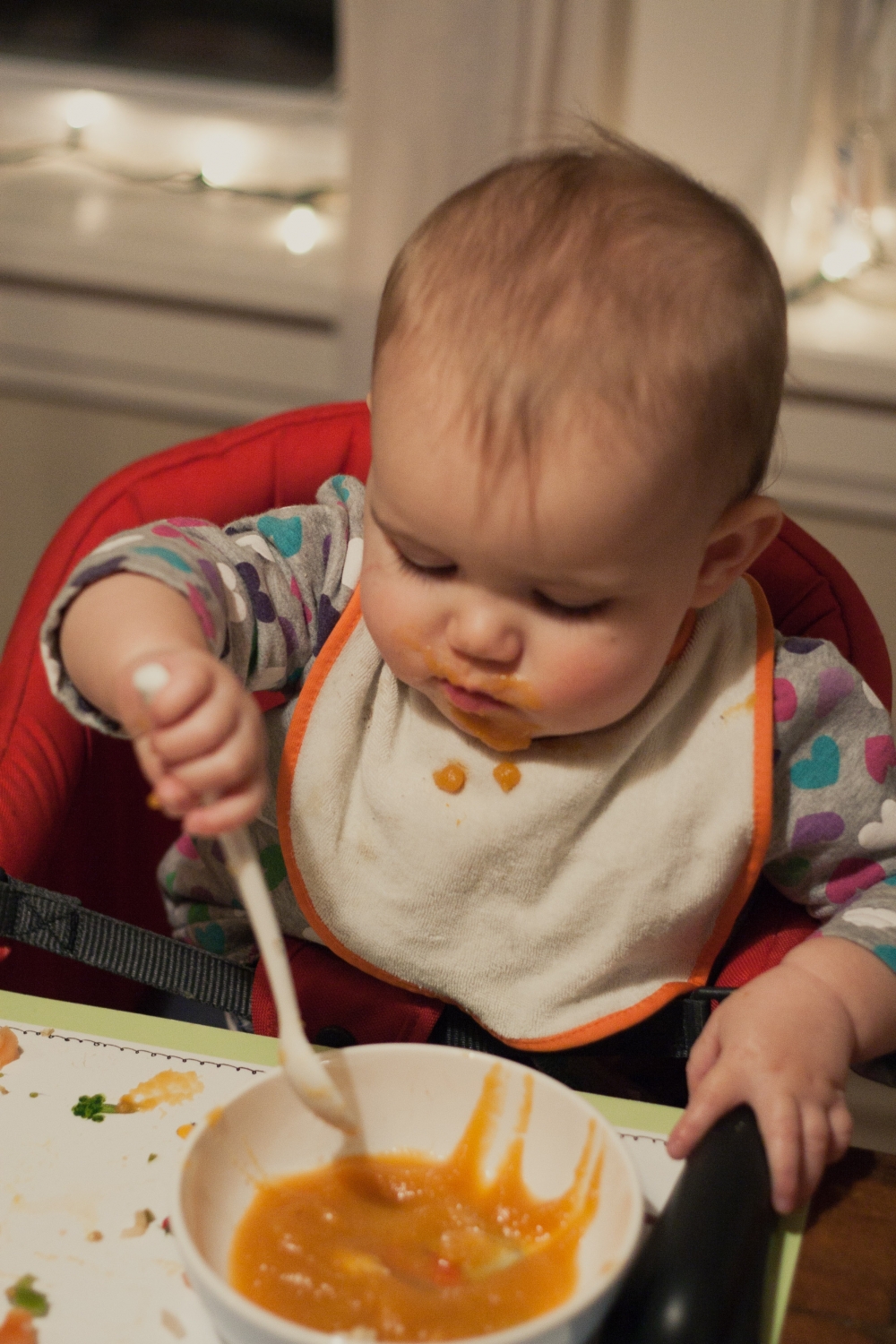 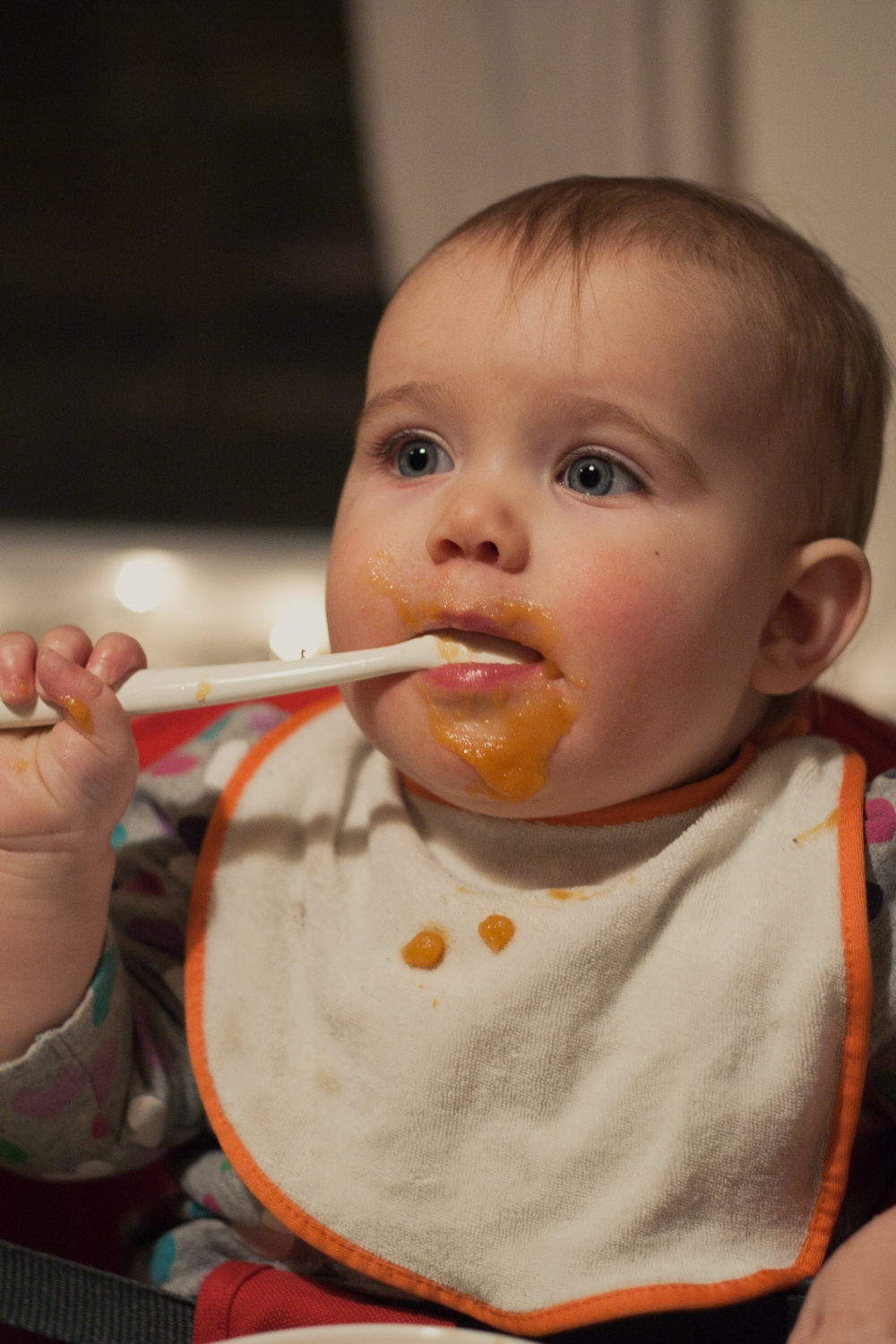 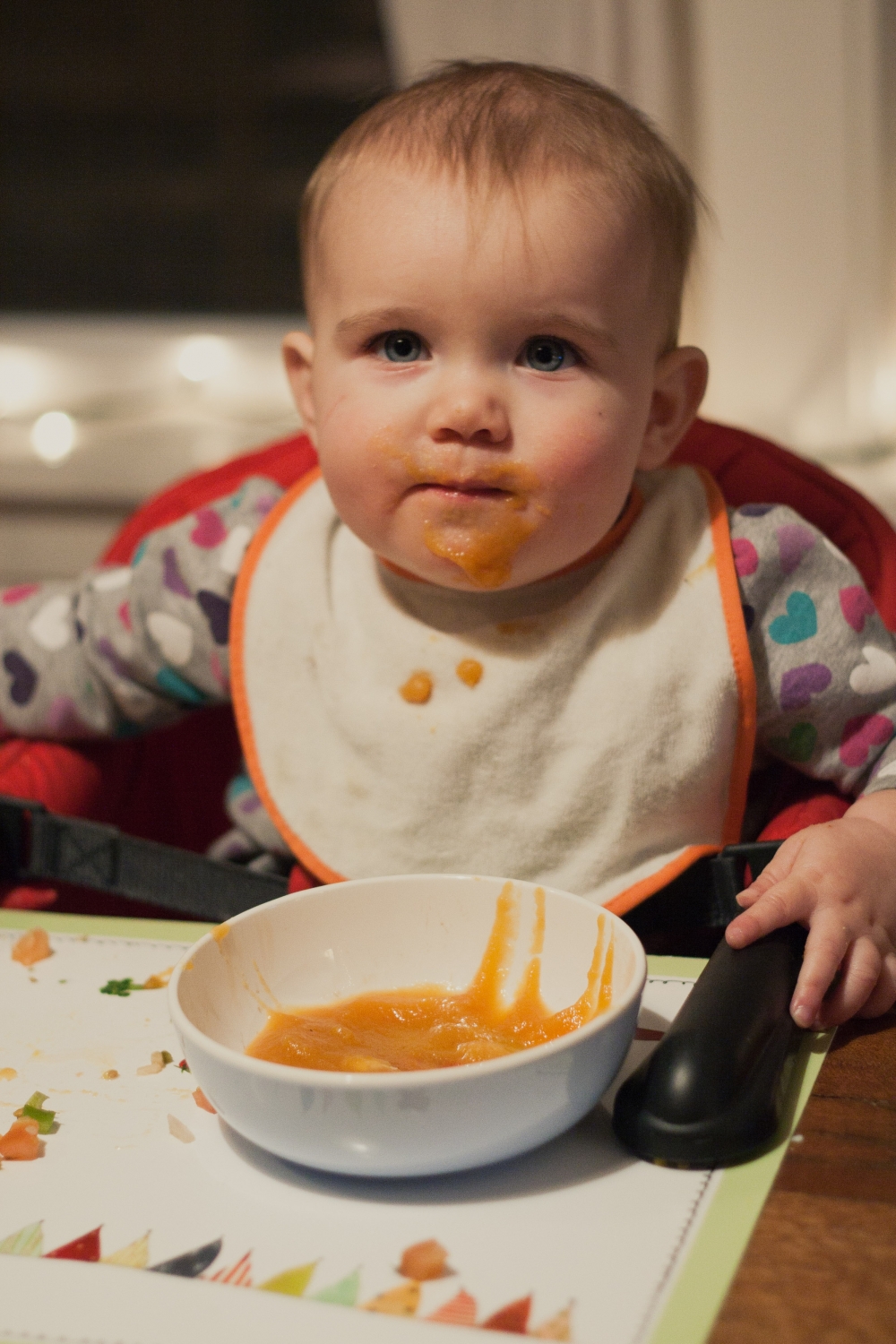 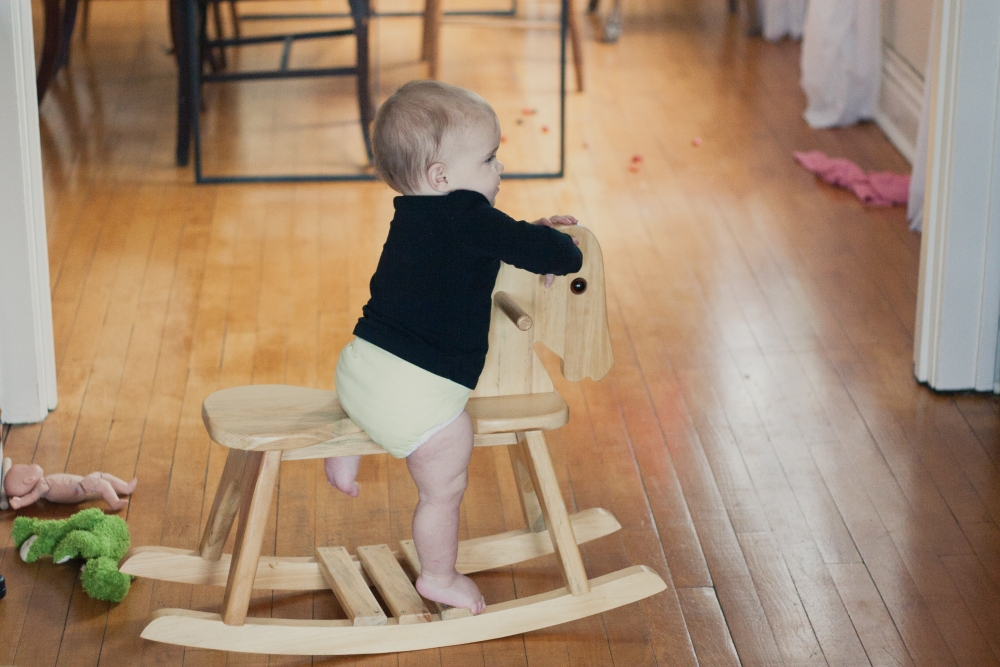 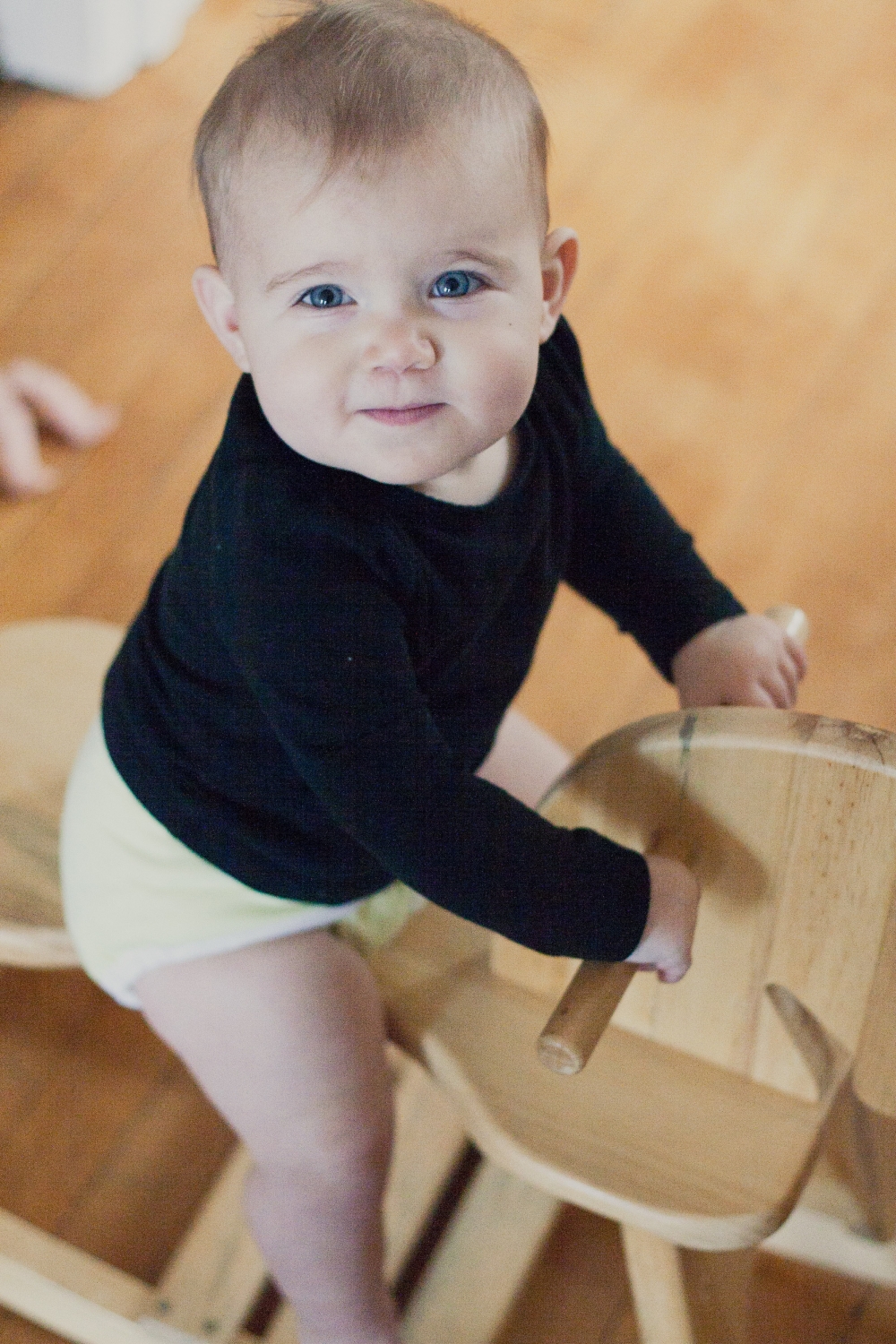