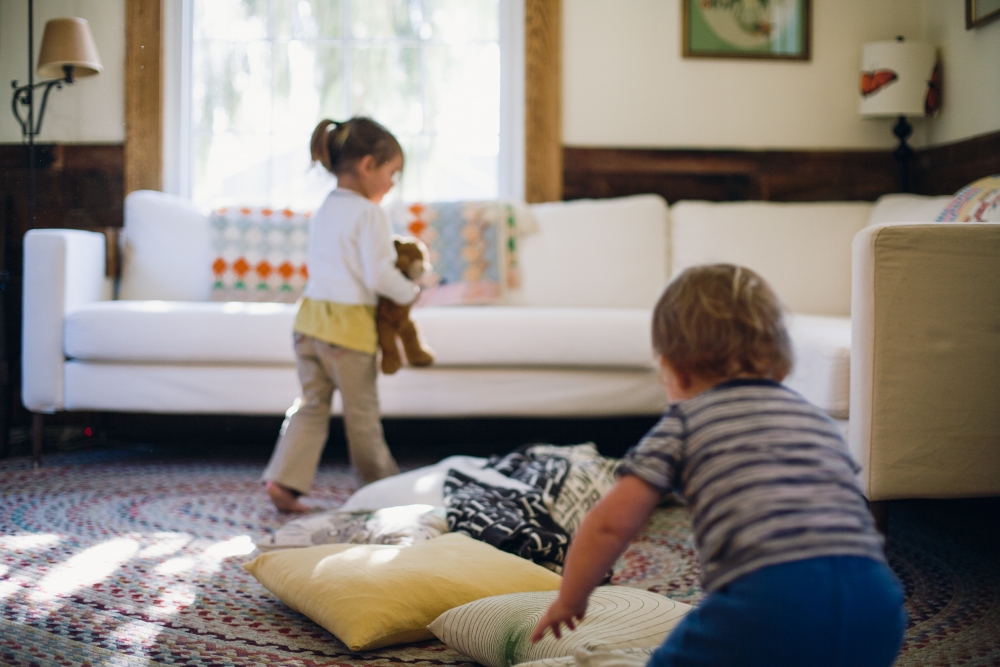 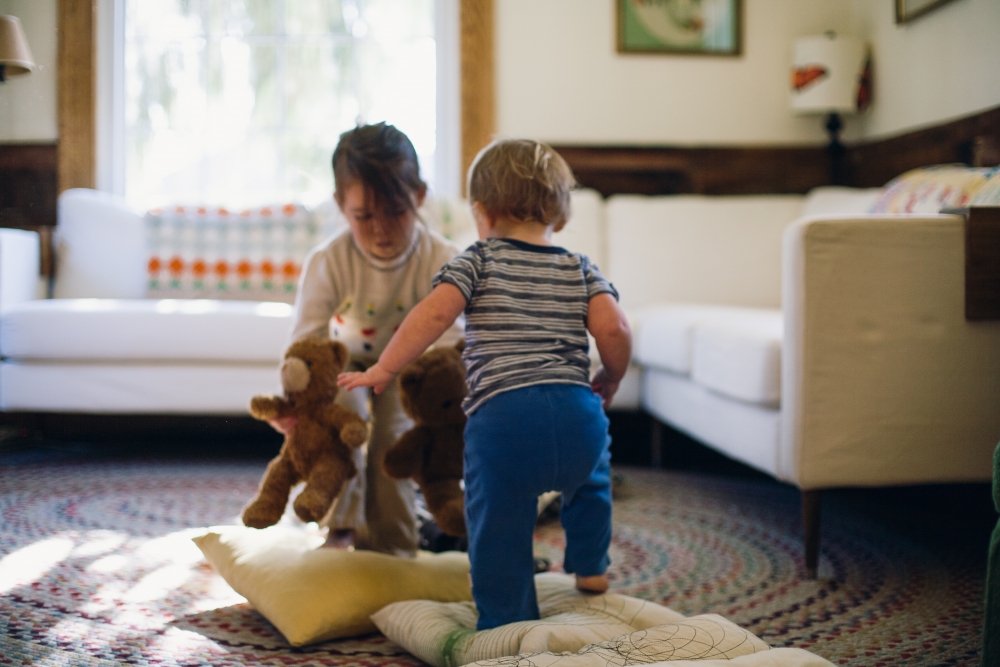 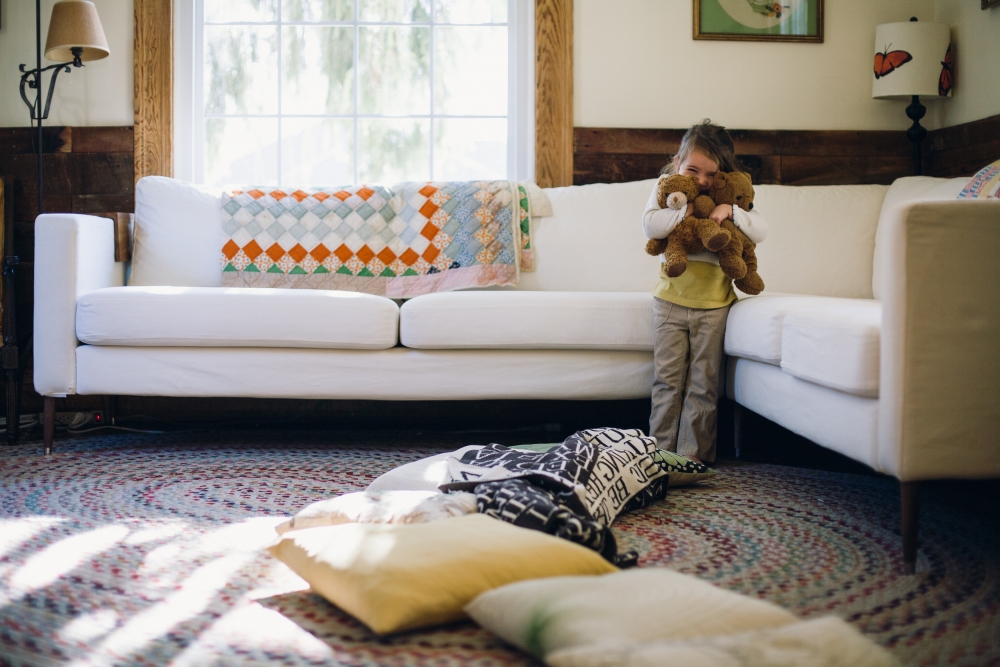 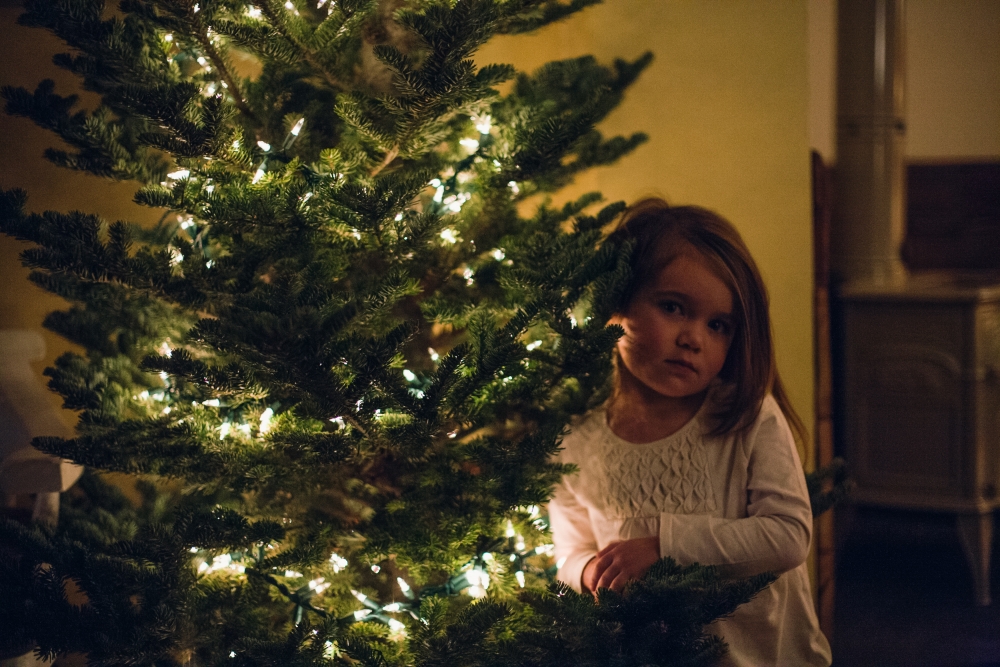 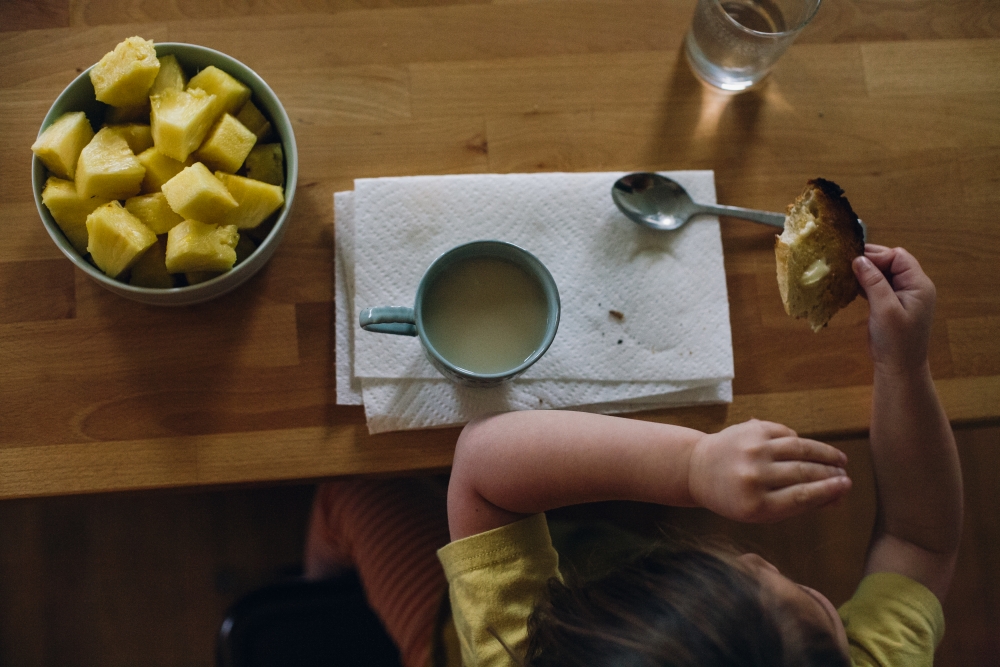 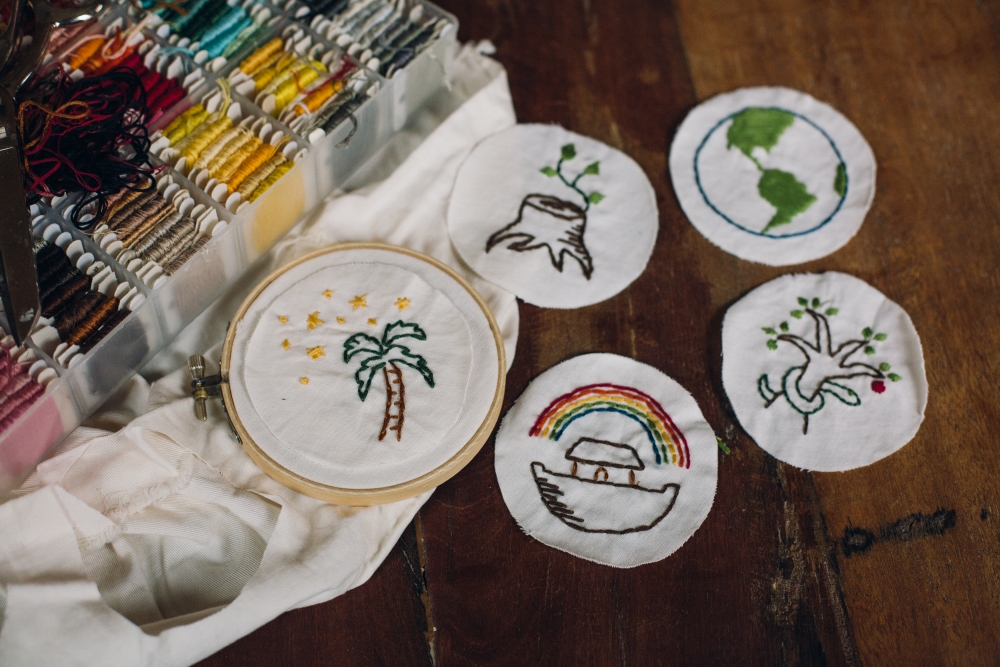 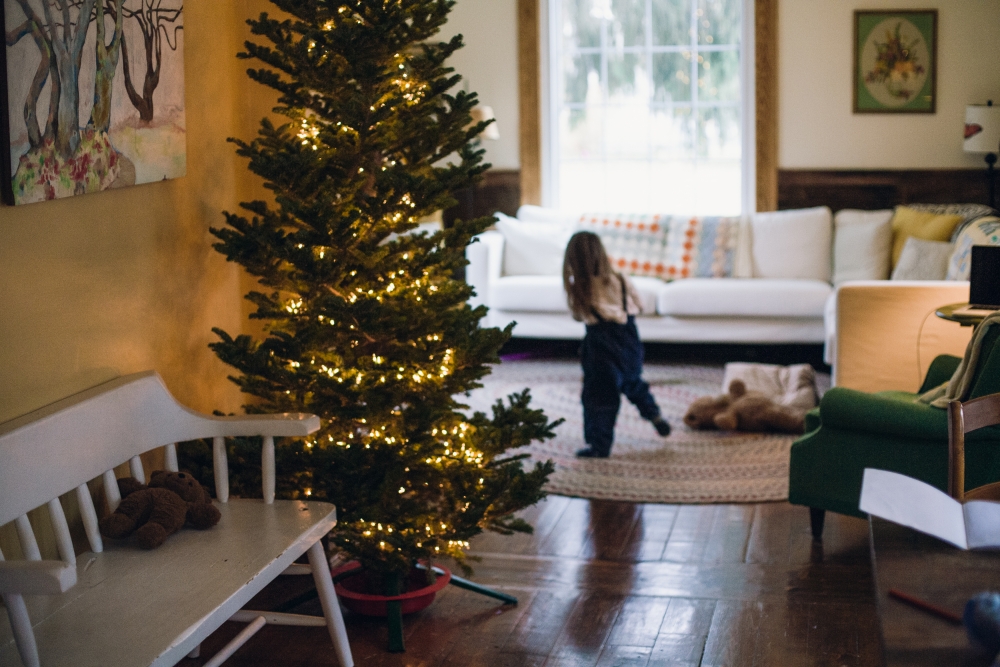 I didn't document the tree cutting this year. Honestly, it was a lot colder than I expected and the kids and I were rather under-dressed, so we hung out in the store while the tree-cutting was taking place. We set the tree up and strung the lights but we're leaving it otherwise undecorated until Christmas Eve. Some families who celebrate Advent will wait until that night before even putting their tree in the house, to magnify the sense of waiting, much like leaving the manger in the creche empty until Christmas. Then the tree stays up for all of Christmas (which really lasts until Epiphany, on January 6th!) I wasn't sure I could face a completely treeless Advent though, so I decided leaving the decorating until Christmas eve was a good middle ground. We're also doing a Jesse tree for the first time this year, and reading through this book by Ann Voskamp with Indy (we all really like it). It was my intention to use our real tree as our Jesse tree this year and to add one ornament each evening, but since I set out to make the ornaments myself and so far have only made 5 of 25, it looks like that part will have to wait until next Advent.

We're finally settling into the cold season. The first several weeks after the garden is really done and the door to the screened porch remains firmly shut, narrowing my world to one less room, I feel that pacing feeling coming on, what do I do now? The rhythms of Advent seem to help with that, actually; the emphasis on introspection, quiet, the thought-life, it all reminds me of the possibilities of this part of the year. Oh yes, there's the books and tea (a ritual Indy has quite taken to this year) and yarn. There's plenty of chances for wonder - not the same as is in July, not the green unfurling and the ruby tomatoes heavy in hand - but a peaceful kind, the falling snow and steam from the kettle and the kids (occasionally) magically sharing toys and quietly laughing together in the other room. It's good. 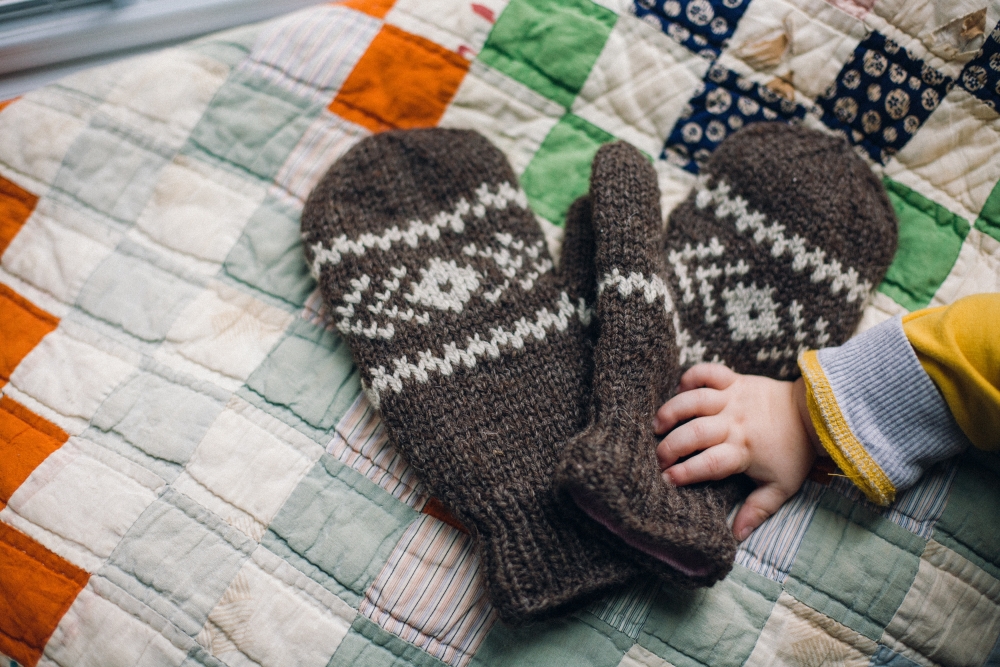 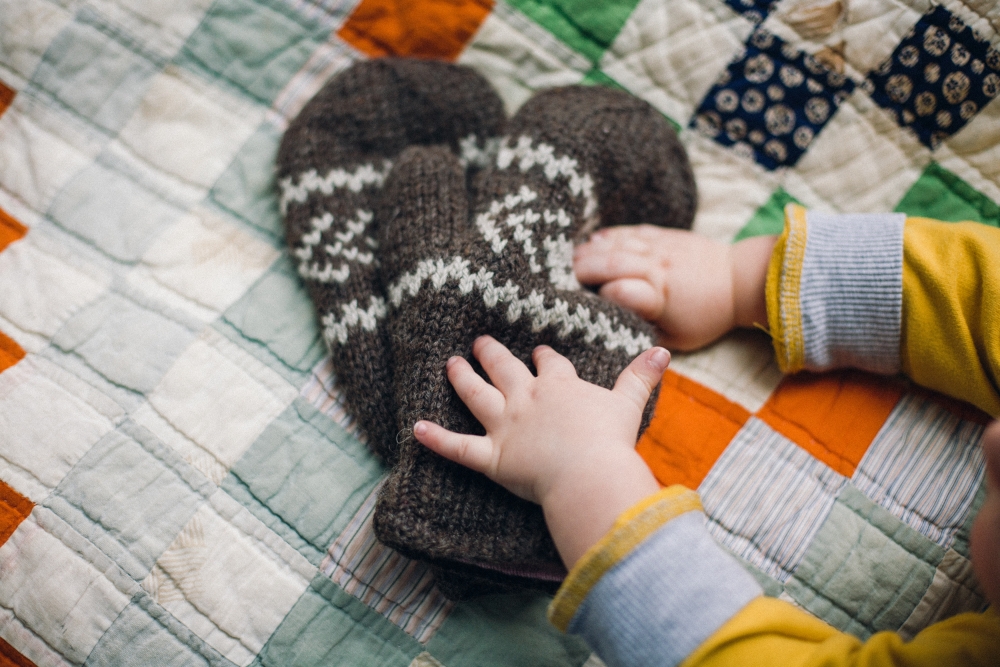 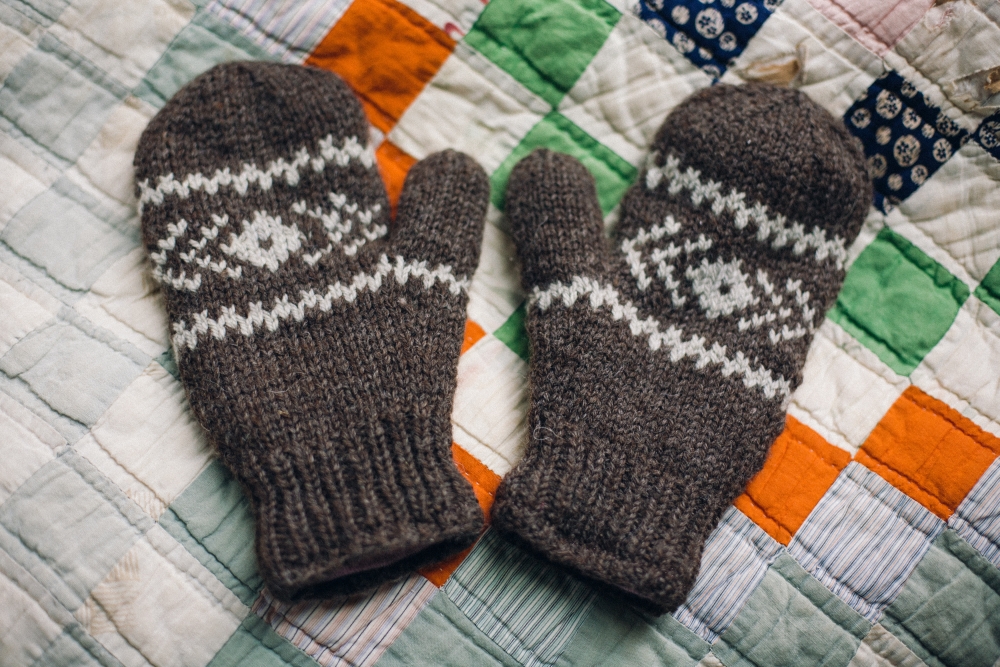 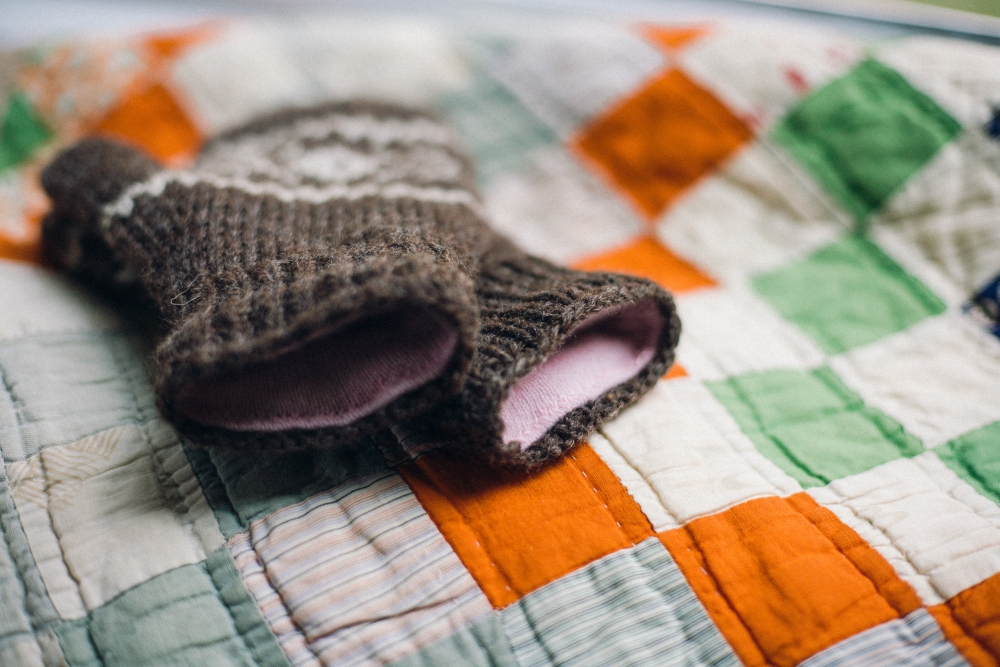 It's been so long since I've joined Ginny for a yarn along! Honestly, I've been avoiding knitting because I've been sort of dreading that colorwork sweater that I've been working on for Indy, and I have a really hard time working on more than one project at a time. Fortunately I've made some good progress on that and it's really coming along (I know I'll be so glad I did it when it's finally done), and I've given myself permission to cast on with some other things that are quicker and more enjoyable. The cold weather helps with the knitting spirit too, of course.

These mittens were for my dear friend Maggie, in return for the beautiful letter-work she did for the Tibault and Toad logo several months ago. I was able to get them done just in time to give them to her while she was visiting home around Thanksgiving. It's the Laurelhurst pattern, knit with Fishermen's Wool as the main color and Stonehedge Shepherd's Wool as the contrast, lined with some thrifted pink cashmere because who likes the wind biting through their mittens? Raveled here.