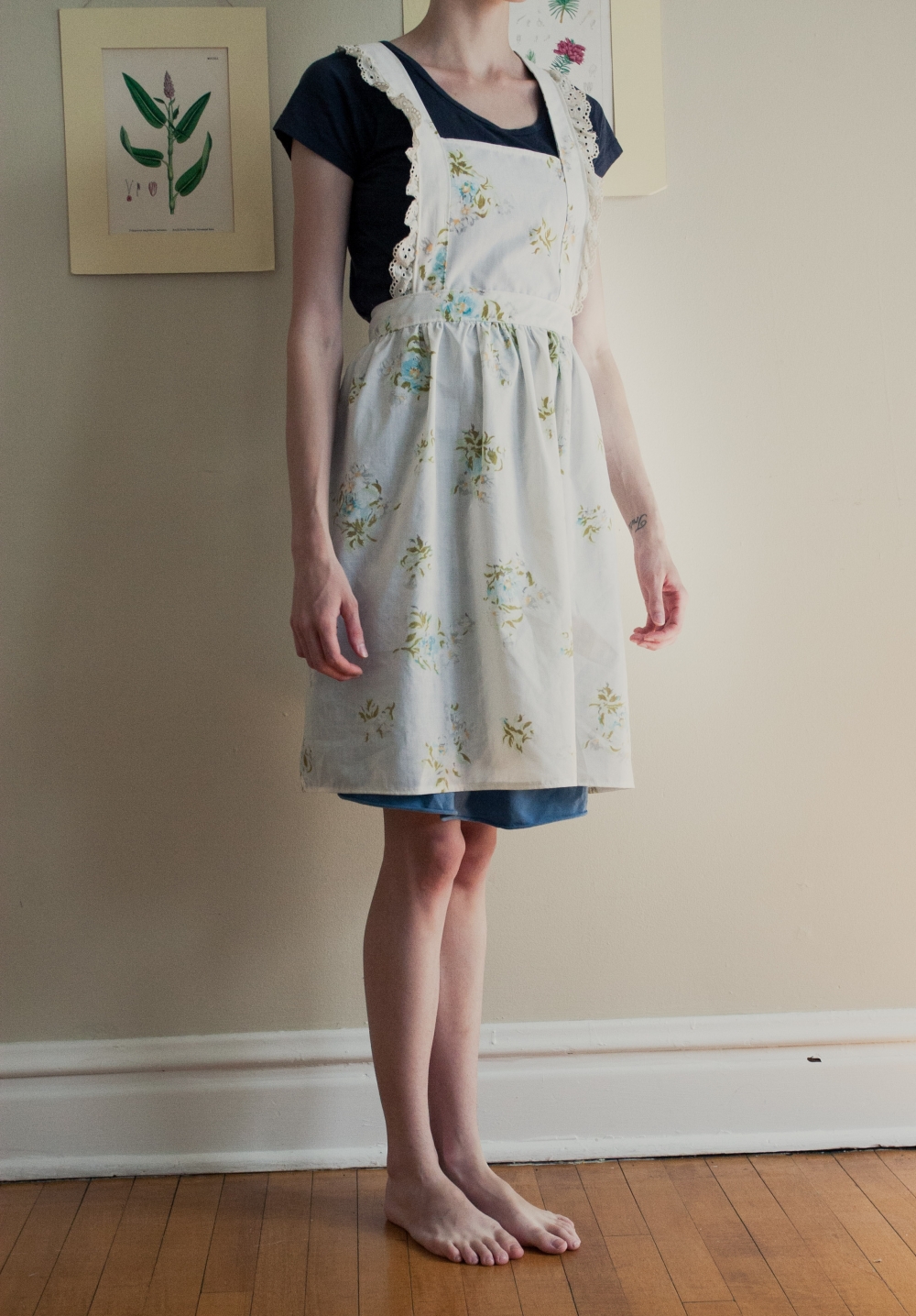 Five years ago I'm not exactly sure what I would have said my dreams were. Family and home would have been in there somewhere, surely, probably writing in some form. But within the past few years, and the past year especially, the Lord has led my heart and mind along a path that has opened into a dream which I think lies closely to His heart, and now to mine also. I want to farm. I want to know dirt and plants, the movements of the moon, transition of seasons. I want to grow our own food, have chickens, and maybe a dairy cow. Its for the sake of the earth and for the sake of our family, the sake of mostly forgotten arts of daily living and survival, and self-sustainability. As Wendell Berry says:

“…the care of the earth is our most ancient and most worthy and, after all, our most pleasing responsibility. To cherish what remains of it, and to foster its renewal, is our only legitimate hope.”

Anyways, I could go on, but for now I'll talk about what a logical girl does when daydreaming about chickens and knowing they're still several years off: redirect that energy into the hunt for farmy clothes. I've decided now's the time to start compiling a wardrobe that jives with my daydreams. Do you know how hard it is to find clothes that speak of early summer mornings in the kitchen and with a skirt worthy of piling vine-fresh tomatoes into? They don't really exist. So I decided I might as well make some things myself. First in this vein: the pinafore apron dress. 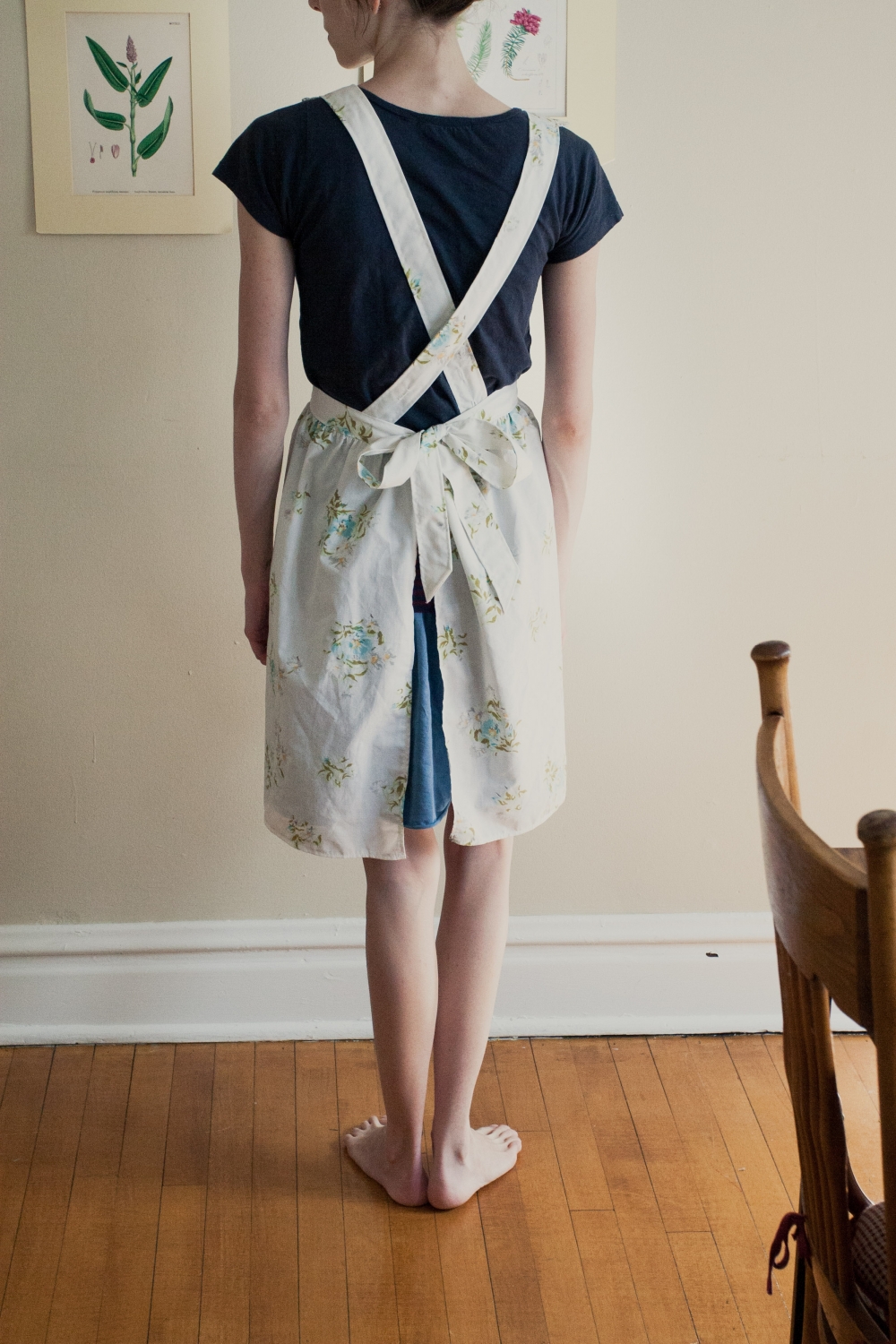 It's open in the back, so its made for layering. I used a vintage sheet from the thrift store, and some leftover lacey ruffle-stuff for the edging on the straps. I made the straps buttonable and therefore adjustable, and obviously the sash tie makes it adjustable as well. It was super easy, since all of the peices are simply rectangles of some sort, so no fancy cutting. I'd gladly offer instructions sometime, if anyone is ever interested. 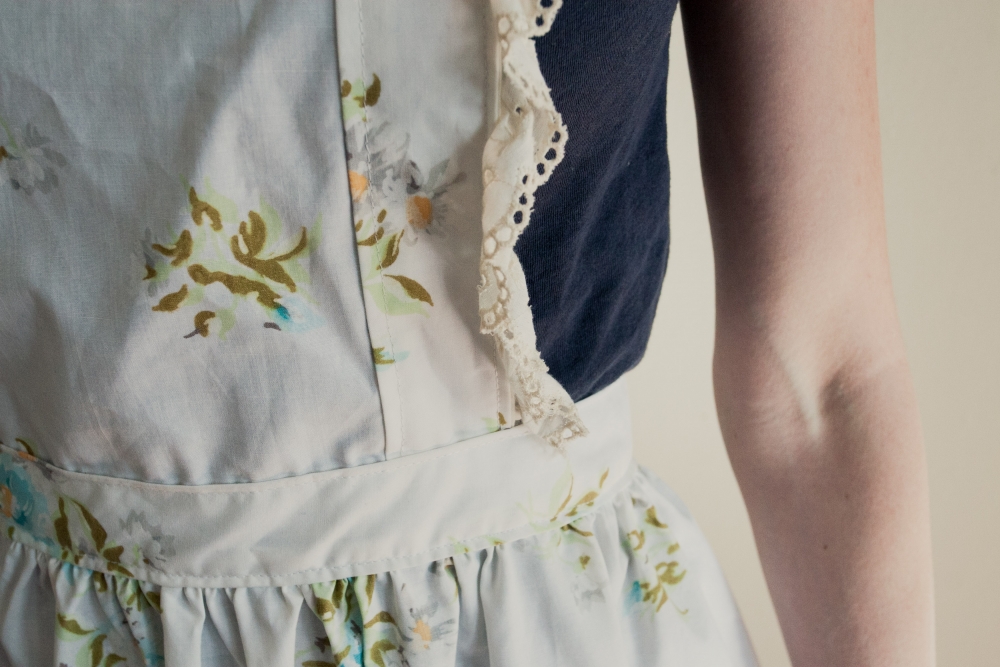 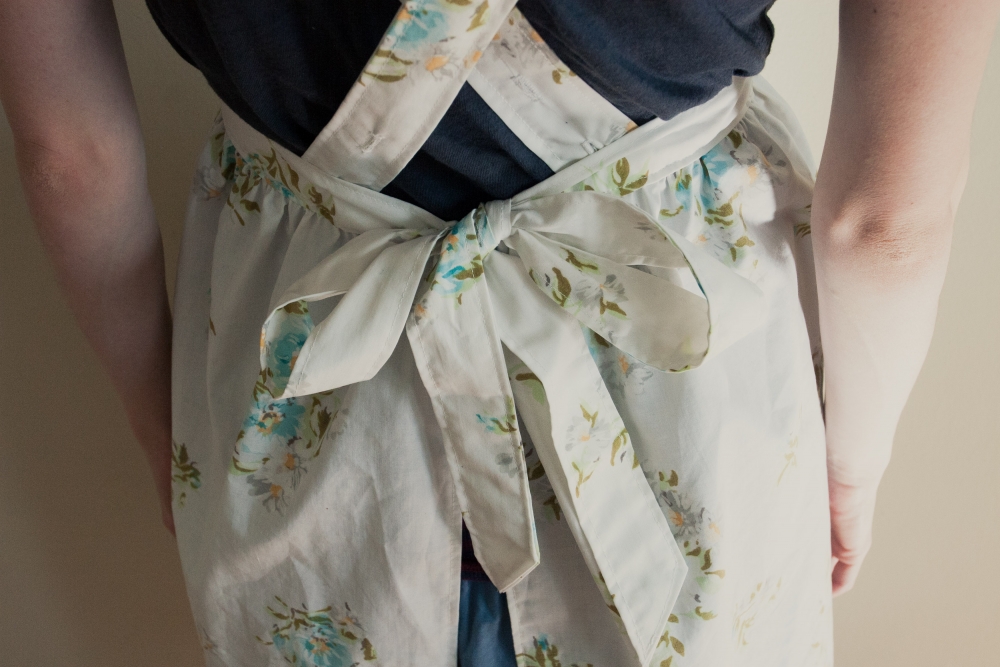 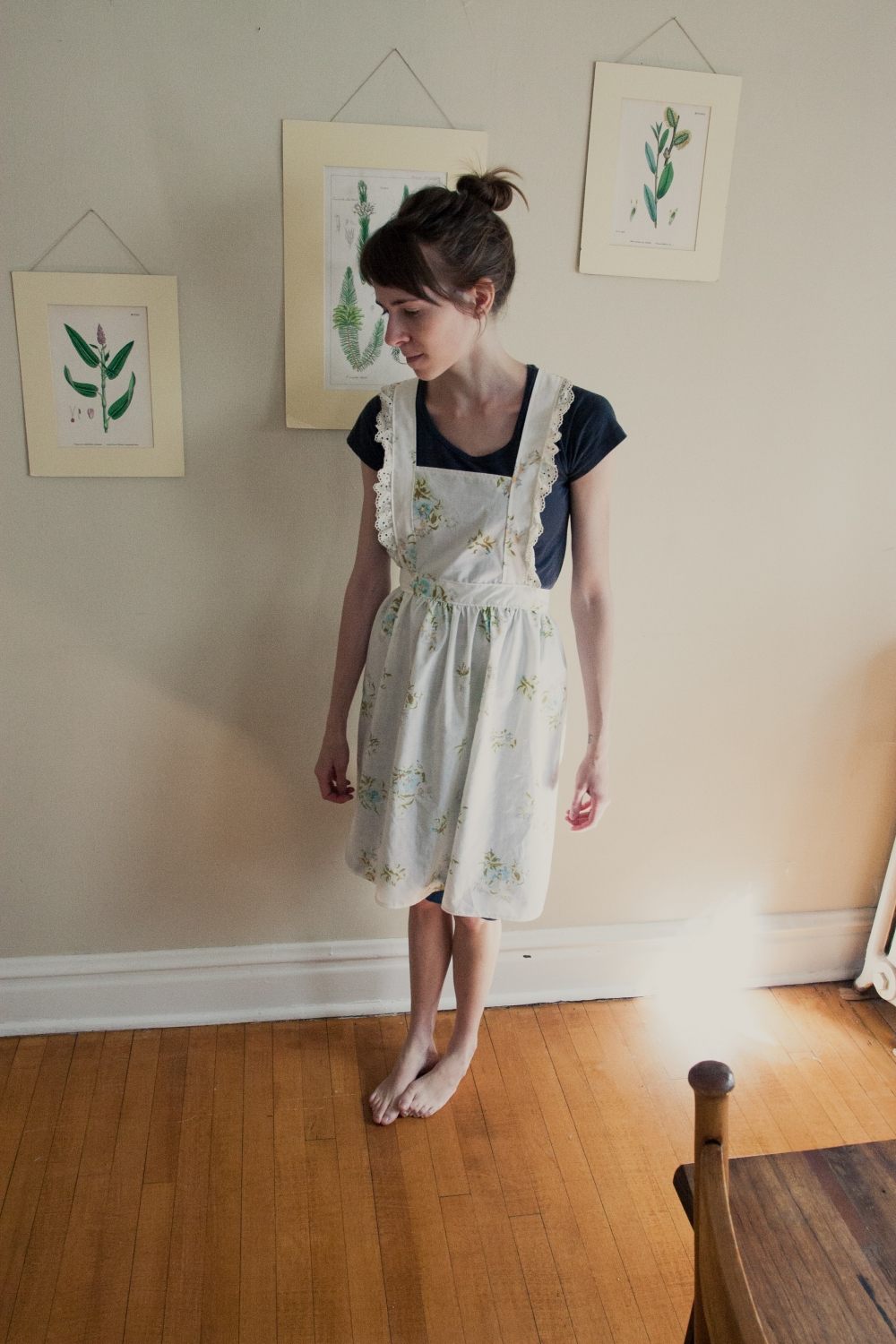 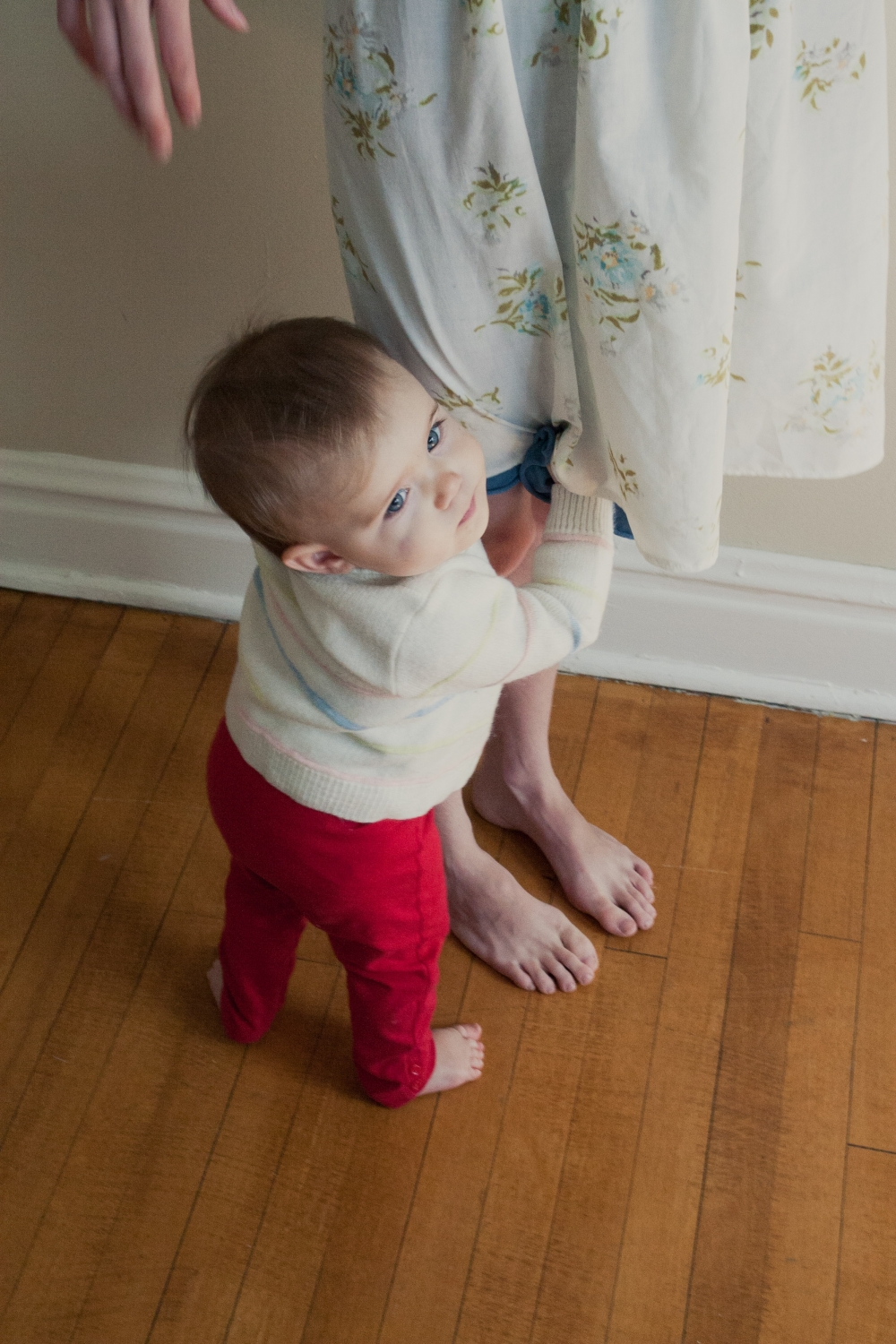 There she is! Isn't there a saying that would go well with this. . . having to do with apron strings?