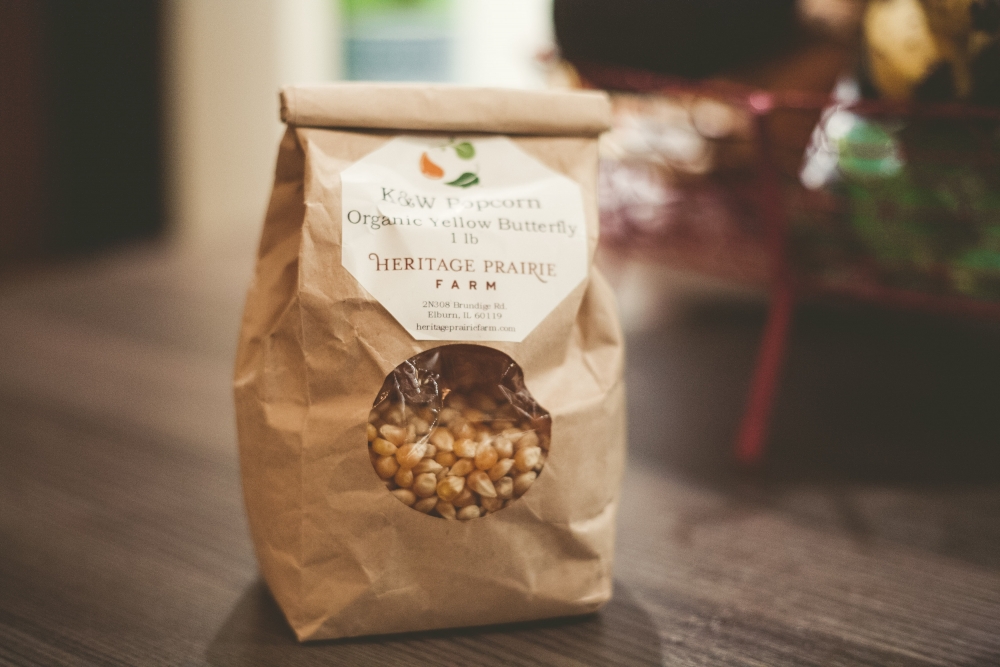 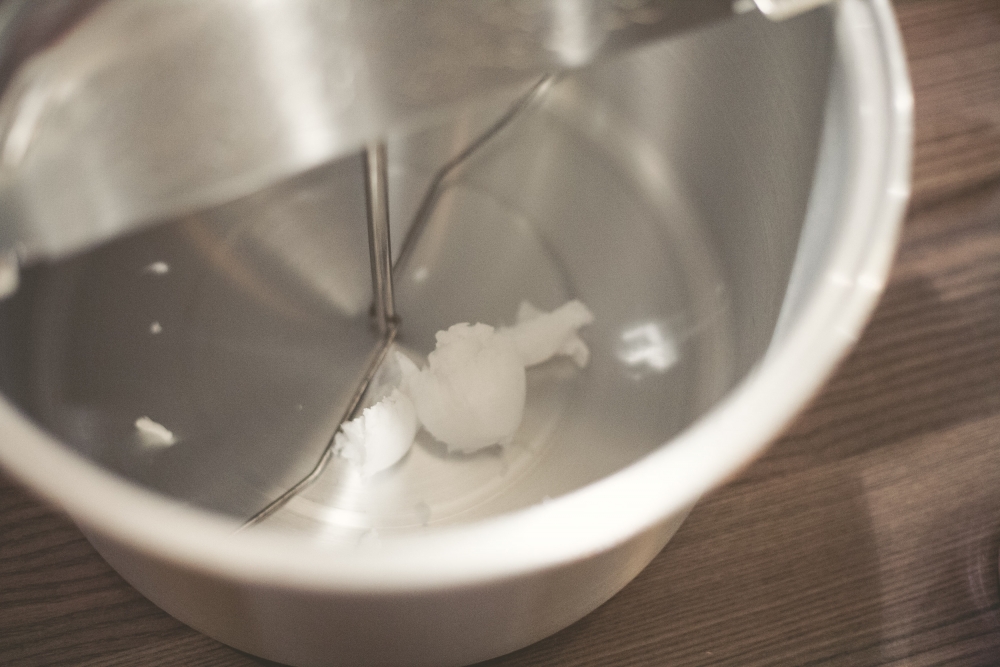 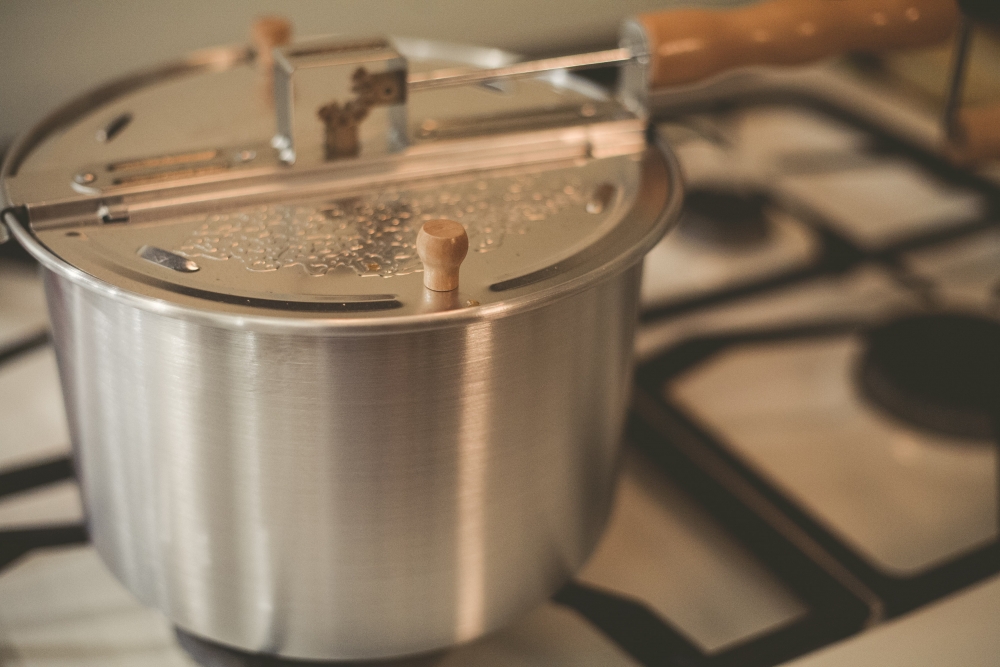 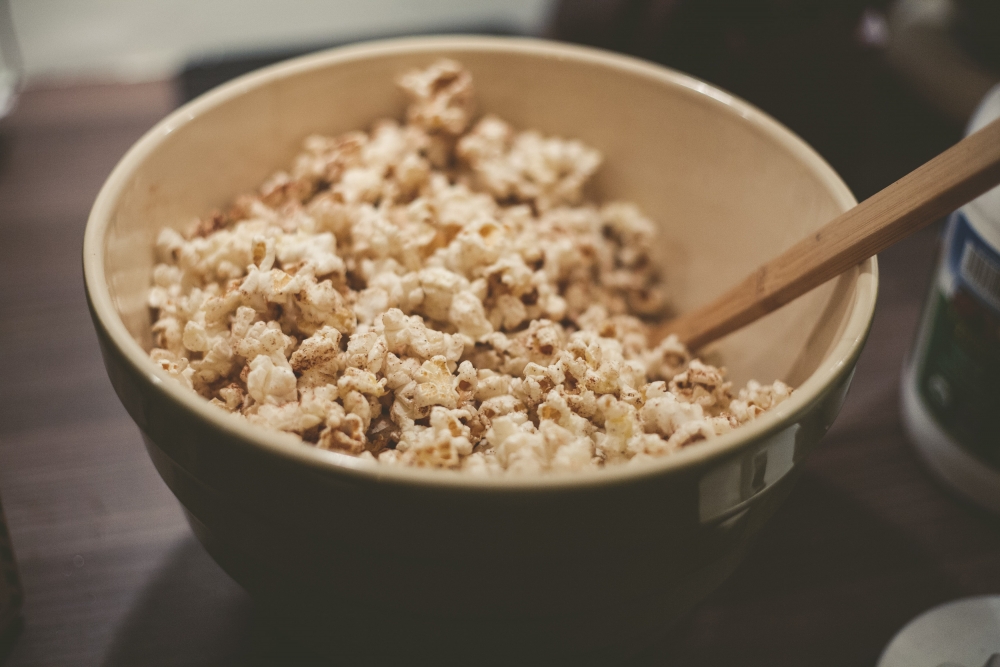 We snagged these organic popcorn kernels from a local farm in early fall at the farmers' market. I made popcorn once in our heavy cast iron dutch oven with the "no-stir" method. It burned on the bottom. Ah well. For Christmas, Alan's parents gifted us a Whirly-Pop, so popcorn making has once again commenced, with no burnage! Being all snug inside on cold winter days really makes me want to make popcorn (and hot chocolate), and we've been having plenty of cold around here.

I always pop in coconut oil as it is very heat stable, and even though I wouldn't mind if it did (since I happen to love coconut oil), it really doesn't flavor the popcorn.  I pop 1/2 cup in about 2 tablespoons of oil, then toss with 2-3 tablespoons of melted butter, 1 tablespoon of sugar of choice, about 1/4 teaspoon salt, and a heavy shake of ground cinnamon. This is so addictive, I always eat way too much and make myself sick. Don't do this. Just eat the right amount and feel awesome. :) 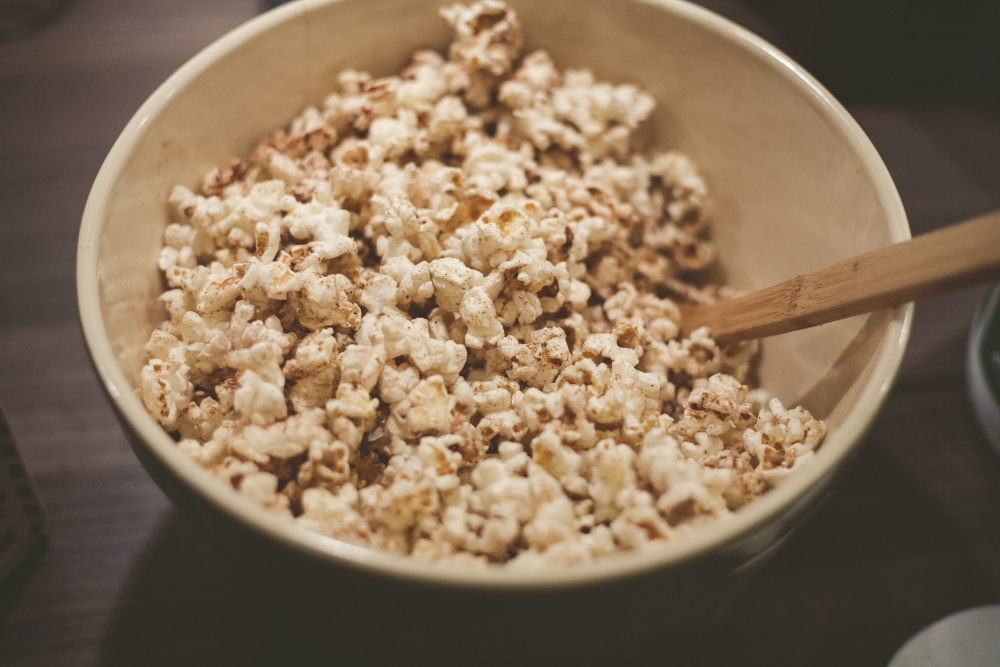 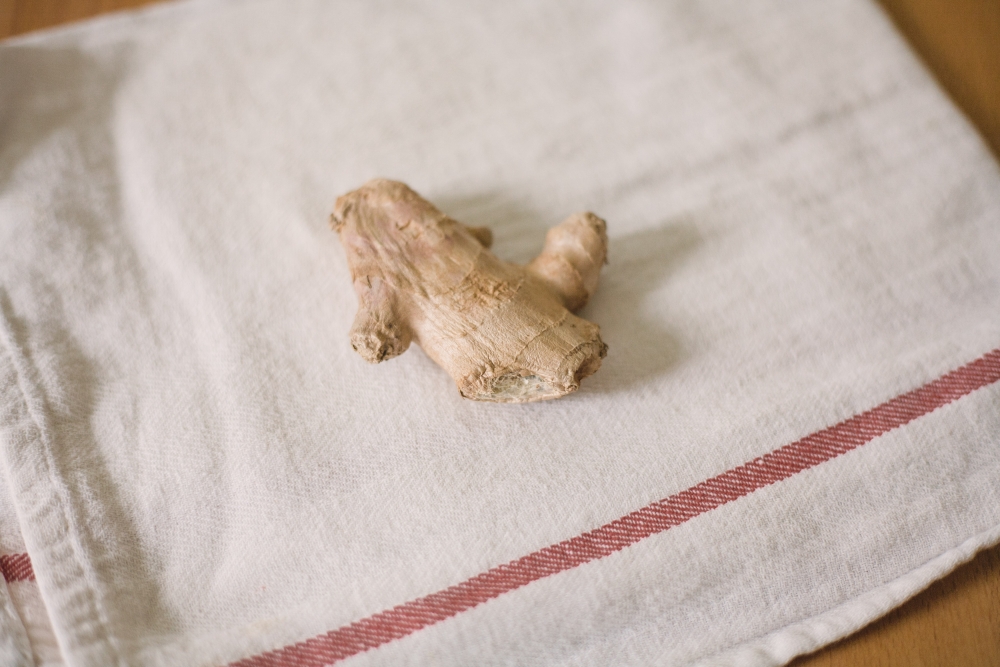 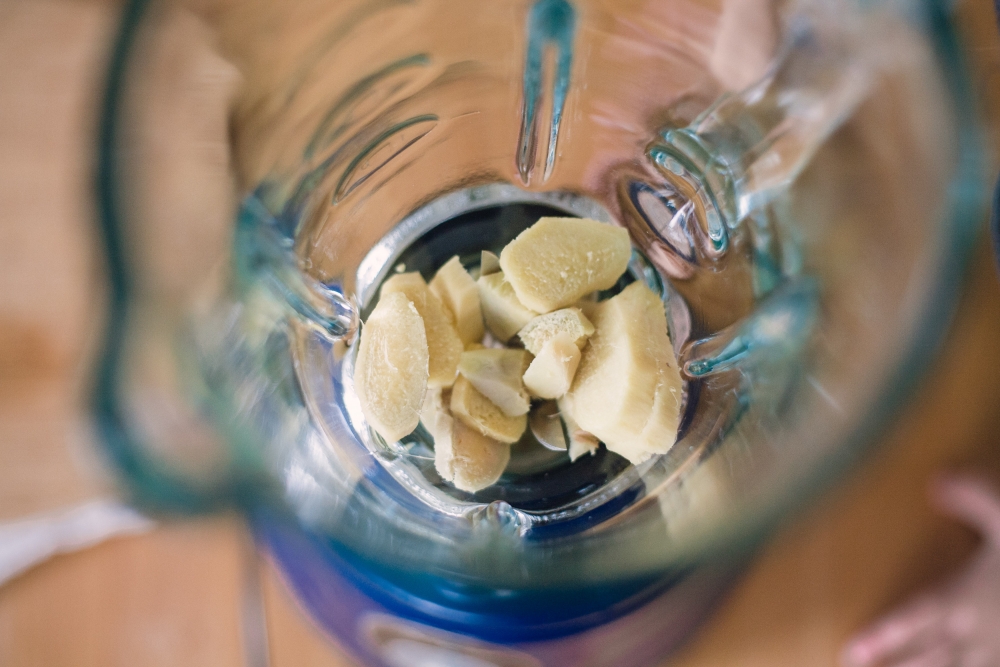 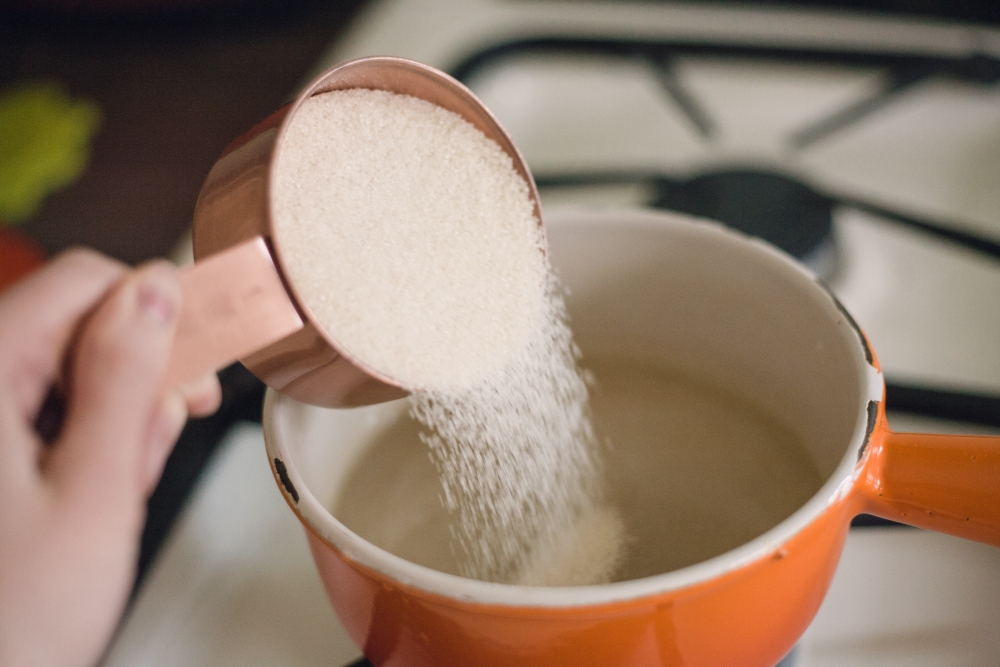 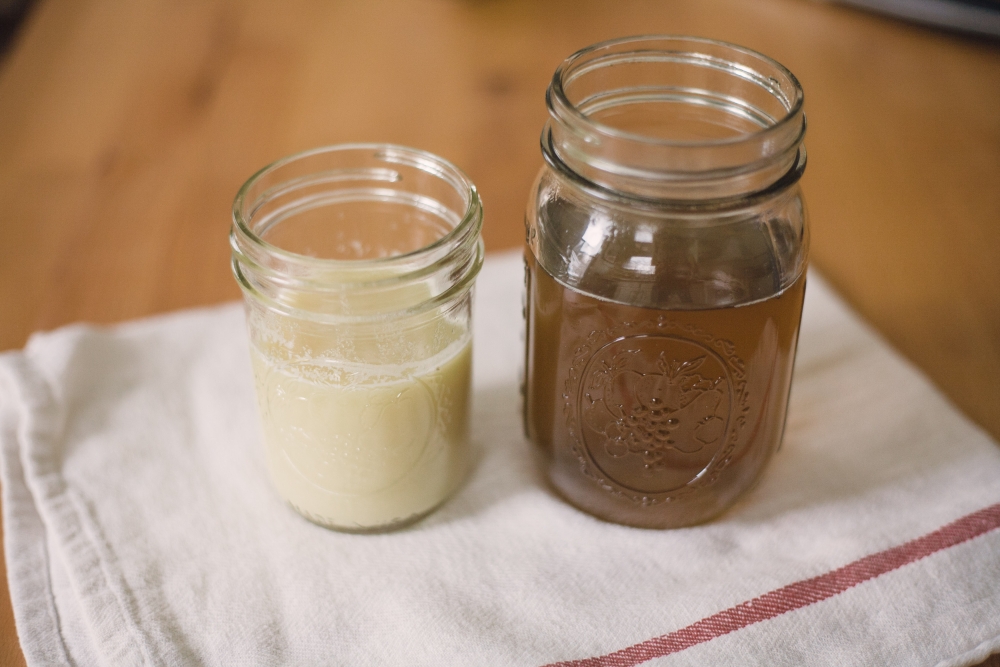 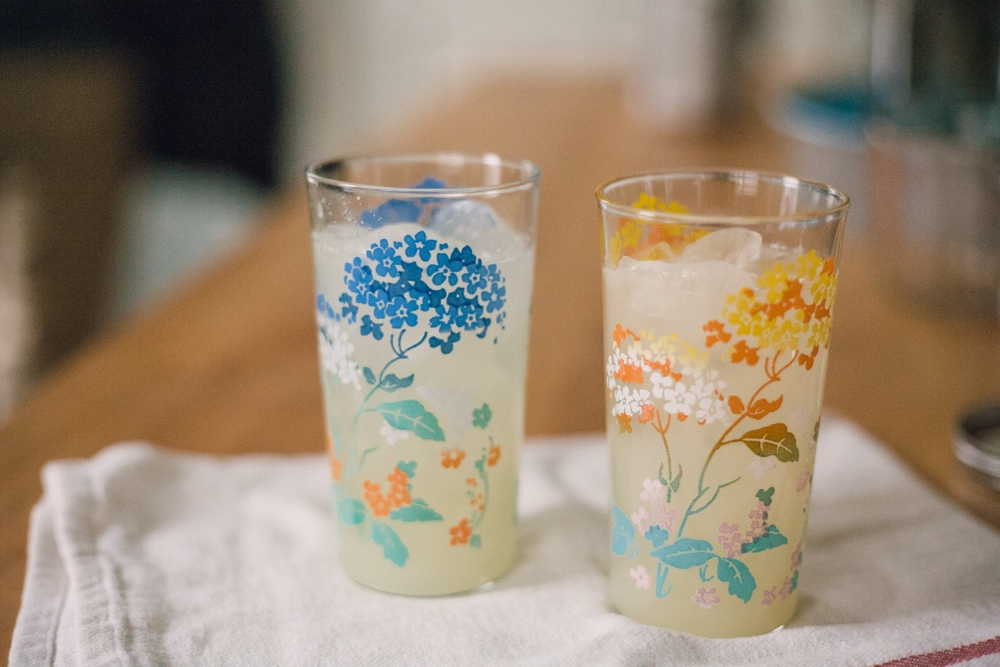 I used to hate fresh ginger - I didn't like the spice. But over the years, it's slowly grown on me until its become an outright addiction. The other day I was really hankering for some ginger soda, so I rummaged around in the kitchen and experimented with making a quick cheaters version made with fresh ginger, simple syrup, sparkling mineral water (like San Pellegrino) and a splash of fresh lemon juice. This is so refreshing and good for everybody all the time (unless, I guess, they hate ginger or something), but would also be useful for settling an upset stomach.

For the ginger juice, I peeled and sliced a 3-4 inch piece and blended with just enough water to cover, then poured into a jar through a fine strainer (you could also use a juicer - if juicing, use half as much ginger juice while mixing your sodas.)

I made a classic simple syrup (a 1:1 ratio of cane sugar to water, bring to boil, let cool), but honey or maple syrup would probably work as substitutions.

I like to mix up a glass at a time so that it doesn't go flat, but you can certainly extrapolate and make a pitcher for a group. I like to start with about 2 tablespoons each of ginger juice and sweetener in 8 oz. of sparkling water, adjusting my ratios until it tastes good, then add a splash of fresh lemon juice and serve over ice.